Previously I discussed the impacts of the NSW Government’s approach to the planning of the Parramatta Light Rail, following the recent announcement that only one of the previously-identified routes – the section from Westmead to Carlingford – would be constructed as the first stage of the project. In this post I’ll discuss the preferred route in a bit more detail, comparing it to Parramatta Council’s original 2013 proposal. This is no longer available online but the following maps show the current route proposal and as a comparison the route selected by Parramatta Council.

The analysis is made somewhat easier because the line falls into three distinct sections, as outlined below. It’s important to bear in mind however that the route and stop locations are indicative at this stage and could change as a result of further consultation.

This section is similar to Parramatta Council’s original proposal, though there are some changes. The terminal at Westmead will provide the most direct connection between the rail network and the light rail line. As it runs northeast away from the station, the line will also provide a crucial role in servicing two major hospitals, Westmead and the Children’s Hospital, each of which has a stop. The line will then swing through an arc via the Parramatta North Urban Transformation Program redevelopment area with a stop there before heading back south down Windsor Road where two stops (Factory Street and Fennell Street) will provide potential interchange points with current bus services.

This section is also very similar to Parramatta Council’s original proposal and forms the heart of the network. The line enters the CBD from the north via Church Street, servicing a range of major current and planned cultural and recreational facilities. There is a stop serving Riverside Theatres and (indirectly) Western Sydney Stadium, and another at the planned site of the Museum of Applied Arts and Sciences. Parramatta’s “Eat Street” runs between these two stops. The line turns at Macquarie Street to run eastwards through the Parramatta CBD, with the stop at Parramatta Square providing the opportunity to access Parramatta station and the neighbouring bus and T-way interchange. As a result this will almost certainly be the busiest section of the system.

The line then heads eastwards with a dogleg via Harris Street to George Street. There is a stop in this section (Harris Street) serving the eastern end of the CBD and providing access to the ferry terminal. There is a further stop at Tramway Avenue before the line heads further east to Camellia. 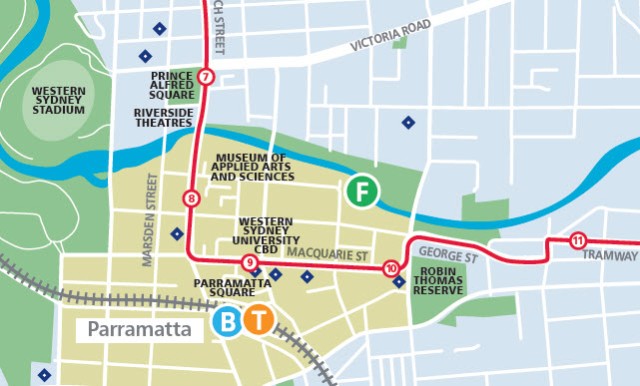 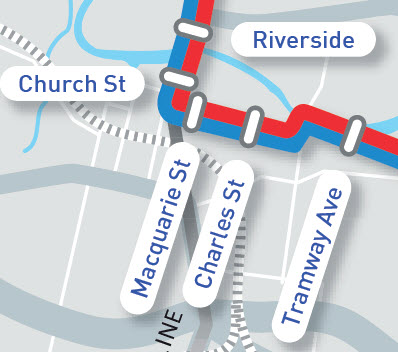 Camellia and the Carlingford Line (stops 12 to 16)

The stop at Camellia marks the end of street running and the start of the Carlingford line conversion. Camellia also services the western end of the Olympic Park redevelopment corridor and will form the likely starting point for the Stage 2 Olympic Park/Strathfield line (the short link leading from the line to a depot to the east of Rosehill Racecourse is the likely start of Stage 2). The line turns north here before veering northeast to follow the alignment of the Carlingford line, running through Rydalmere, Dundas and Telopea stations before terminating at the current Carlingford station. The indicative map suggests these station locations will be maintained as light rail stops.

The duplication of the existing single track rail line and its conversion to become part of Parramatta Light Rail will improve service frequencies in this section. The conversion will also provide direct connectivity from the area currently served by the Carlingford line to Parramatta CBD, Westmead and the Children’s Hospital and eventually the Olympic Park corridor. The light rail line will also greatly improve accessibility for the thousands of students attending the Western Sydney University campus at Rydalmere.

Unlike the other segments of the line, the alignment in this section differs considerably from Parramatta Council’s proposal. This opted for the light rail line to leave the heavy rail corridor at Dundas station and head northeast to connect with the existing Main North heavy rail line at Eastwood and then with the current Parramatta-Epping rail line (and planned metro line) at Macquarie Park. The line now proposed for Stage 1 does however still provide an opportunity for an extension from Carlingford to Epping station and it is understood this option is still under investigation. 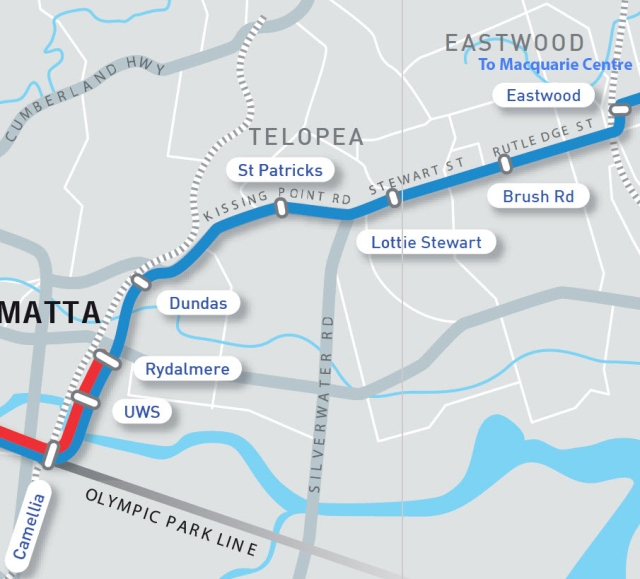 While it is disappointing that the government announcement has confirmed the retreat from Parramatta Council’s original vision of a connection from the light rail line to Eastwood and Macquarie Park, the line selected still follows much of Parramatta Council’s preferred route. The route, especially the section between Westmead and Camellia is a better option to start with if as the government has indicated the project has to be broken into stages.

The line will greatly improve connectivity between the Parramatta CBD, North Parramatta and the hospital complex at Westmead. It will also provide better links to and from Western Sydney University campus at Rydalmere and from the Carlingford line to downtown Parramatta. The portion of the line between North Parramatta and Camellia in particular is central to the PLR network. As well as providing a circulator within the Parramatta CBD this corridor will act as a central spine with enough capacity to support the planned Stage 2 line and, in the longer term, links to other centres such Castle Hill to the north and Bankstown to the south.

As this analysis has demonstrated however, there are aspects of the preferred route that still need resolution. The location of individual stops relative to transport interchanges and major traffic generators like the hospitals, WSU campuses, redevelopment areas and Parramatta Stadium need to be carefully considered. The options for expanding the network, including the already-foreshadowed Stage 2 link to the Olympic Park corridor will be examined in my next post in this series.