The recent announcement by the NSW government that the Parramatta Light Rail (PLR) project will be built in stages, with Stage One prioritising a link to Carlingford over one to Sydney Olympic Park, should come as no surprise. Ever since the November 2016 announcement of the Metro Sydney West (MSW) it was clear that the relationship between the light rail and the proposed metro line would need to be resolved before either project could proceed past concept stage. That the situation has got as far as this without resolution says a lot about the government’s infrastructure planning processes.

The project’s history is too complex to discuss in detail (see this post on the Transport Sydney blog and this Wikipedia article which both discuss aspects of its convoluted development) but in summary the PLR draws on a detailed feasibility study into a regional light rail network released by Parramatta Council in 2013, though it differed in several key respects The Council study had proposed the gradual construction of a light rail network centred on Parramatta, commencing with a line from Westmead via the Parramatta CBD and extending all the way to Macquarie Park via Eastwood using only the southern part of the Carlingford rail corridor. This and a line to Castle Hill were seen as priorities ahead of a line via Olympic Park to Rhodes (and not Strathfield). 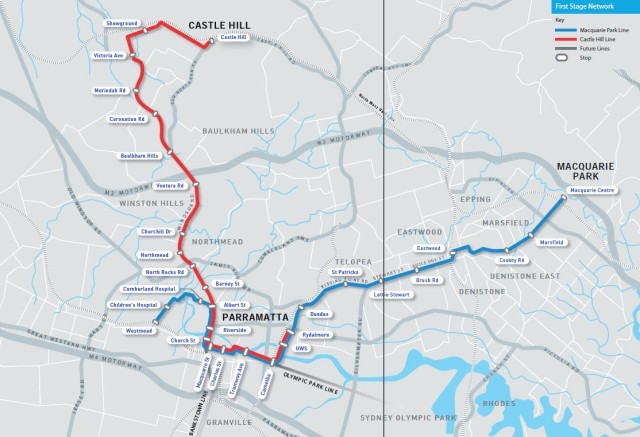 In the run-up to the 2015 State election both major parties committed to funding the light rail network but also gave the Olympic Park corridor higher priority. After the election the Baird government announced in December 2015 that a two-line network would be developed. Similar to the Council’s proposal, the line would start at Westmead and run through North Parramatta and the Parramatta CBD to a junction at Camellia. There, in a departure from Council’s original plan, one branch would head north-east to Carlingford along the existing heavy rail corridor and the other eastwards to Strathfield station via Olympic Park. 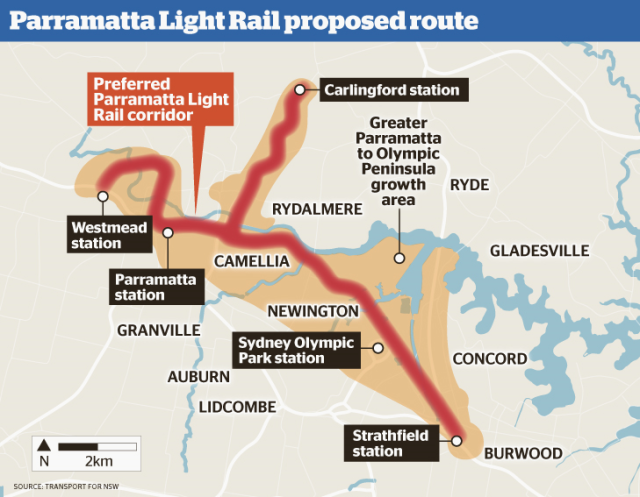 Consequently, there was some disappointment that plans for a link extending further northeast beyond Carlingford had been dropped in the government’s announcement. The confirmation that the Olympic Park corridor had received joint top billing was also criticised, but the line was also championed strongly by local business interests and others keen to redevelop some of the old industrial areas along the route. Part of the rationale for the adoption of this line was also that a special infrastructure contribution could be levied from this development to partly fund the cost of the link.

The announcement almost a year later that the government would construct the Sydney Metro West from Sydney CBD to Parramatta raised as many questions as it answered, offering little information about the proposed route apart from a few vague statements about the potential location of four stations including one at Olympic Park. Several commentators raised the prospect – which I also discussed at the time – that despite the lack of detail this meant there was a strong potential for the metro to partially duplicate the route of the light rail. The announcement last week that the Olympic Park/Strathfield corridor was being shunted off to a State Two for the PLR project to allow it to be planned “in collaboration with Sydney Metro West” confirmed that this issue is still unresolved.

It also underscored the messiness of the government’s approach to these two projects. It seems extraordinary that a government can release with great fanfare a proposal for light rail to be provided as a priority in a particular corridor, only to have to defer the project because of the potential conflict with a metro project the same government has subsequently announced to run in the same corridor. Not surprisingly, sections of the business sector and other supporters of the Olympic Park route have expressed their concerns over the government’s backflip.

The need for a more holistic approach

This outcome highlights another problem with the government’s transport planning processes. While it has avoided the trap of the over-planning but under-delivering of transport infrastructure that its processor fell into, these processes have become overly compartmentalised. Major transport projects appear to be designed in isolation from each other, with only last-minute consideration of their cumulative and at times conflicting impacts. The rationalisation behind this planning fragmentation is hard to discern, though there is a possibility that it may be driven by the government’s privatisation agenda.

If the government had adopted a more holistic approach it would have considered all the transport needs and options for the whole Olympic Park corridor and released a single infrastructure plan incorporating all transport modes. Indeed, it should have gone further and drawn on elements of Parramatta Council’s original light rail plan to announce a complete multi-modal network that would link Parramatta with a range of other regional centres and not just Olympic Park. This would have also gone a long way to addressing Sydney’s woeful lack of orbital public transport infrastructure.

Despite all these shortcomings, the project as announced will bring major benefits to Parramatta. These and some of the issues regarding the State 1 route which still need resolution will be discussed in the next PLR post.