Back to the Future? – Sydney Region Plan and Transport Strategy (part 1)

For anyone who has been involved with metropolitan planning in Sydney for any length of time there is a whiff of familiarity surrounding the release by the Greater Sydney Commission and Transport for NSW of a suite of documents outlining a vision for the city’s next 40 years.

This is not just because the draft Greater Sydney Region Plan (GSRP) and the Future Transport Strategy (FTS) join a long line of planning strategies that stretches back nearly 70 years to the 1948 County of Cumberland plan. They also are the latest entrants in an ongoing and never entirely settled debate about the spatial nature of the city and the number and designation of major centres of activity outside the CBD, especially in Western Sydney.

The acknowledgement of the need to support such centres started patchily and belatedly in the 1960s and 70s with the then largely symbolic recognition of Parramatta as the city’s second CBD. The twin horses of suburban growth and car dependency had already bolted and the notion that this designation would require the substantial reallocation of resources to actually mean something took a while to catch on.

Recognition of the other major centres in Western Sydney took even longer and the process produced a range of anomalies. For example, the previous Labor state government’s 2005 “City of Cities” strategy identified five cities, the “harbourside” cities of North Sydney and Sydney and the Western Sydney “river cities” of Parramatta, Penrith and Liverpool. This somewhat arbitrary designation failed to recognise the importance of other major centres in the region such as Blacktown and Campbelltown that happened unfortunately to be riverless.

Now with the release of the SRP the Greater Sydney Commission has swung the other way, opting for only three cities with a couple of additional twists. The cities are no longer named after their notional CBDs but instead have a more regional character; the “Eastern Harbour City” for example essentially equates to Sydney’s coastal fringe, including the CBD and harbour, while the “Central River City” focuses on both Parramatta and Sydney Olympic Park.

The third city is the most controversial. The “Western Parkland City” will be an “emerging aerotropolis” centred on the proposed Western Sydney Airport – in other words, the construction of a major new city and all its attendant infrastructure virtually from scratch, surrounding and largely based on a new airport.

Leaving aside for a moment the debate regarding the environmental impacts of the proposed airport and the question of whether it will generate enough jobs to be the centrepiece of a city, there has to be a huge question mark over how this proposal will be resourced and implemented given the substantial costs involved. The issue of the proposed transport links required to support the Western Parkland City are at least addressed in the FTS though these still seem to be largely aspirational, while there appears to be very little to quantify the other infrastructure such as the hospitals, schools, universities and cultural and recreational facilities that will be required.

Over a series of occasional articles I will look at some of these issues starting with the transport infrastructure proposals, but in this first post I’m taking a quick look at the structure of the GSRP and FTS and in particular their websites.

Where’s the plan of plans?

Both the Greater Sydney Region Plan and the Future Transport Strategy involve substantial documentation, though for supposedly closely integrated strategies (which is the word I’ll use to describe them collectively) widely divergent approaches have been adopted in their development and public presentation via their respective websites.

The Draft GSRP comprises a single major plan, complemented by five district plans that were released separately. This means its website is the much more straightforward of the two. It starts with a one-sentence description of the plan’s purpose followed by six large tiles with links to key aspects such as “Plan on a Page” and “Vision to 2056” – though somewhat confusingly there are two tiles relating to making a response – “Make a Submission” and “Have your Say”. 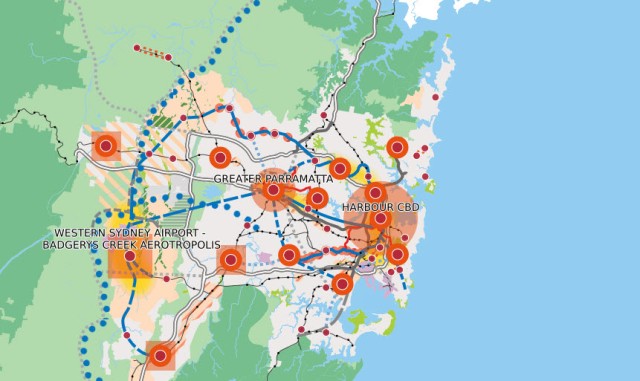 Immediately beneath these is another one-sentence description of how the plan will be “guided by 10 overarching directions” which are represented in a horizontally-scrollable row of icons. Clicking on each of these identifies the direction and provides summaries of the direction’s “metrics” and objectives. There is however no link from these directions to a more detailed online summary.

The page is rounded out with a “Want More Details?” section in which there are links to download either summary or full version PDFs of the plan and to “Open the Digital Magazine”, links to a web-based version of the full plan. This is followed by another link to make a submission and finally links to the District Plans, background material, the Future Transport Strategy and another link to “get involved”.

There appear to be two ways to make a submission. The first involves a one-page submission form with provision for attachments. The second is a much more complex 41-page Guided Submission form. The closing date for submissions is 15 December 2017, though neither form states this.

The home page – which requires a lot of scrolling – opens with “React to the future” which asks viewers to “Share your feedback on our draft 40-year strategy by selecting a reaction, entering a comment or submitting a proposal”. It seems a bit strange to be asked to react to something you haven’t read yet, and it’s even more confusing when the two links in the same box are enigmatically titled “Play the Video” and “Read the Stories”. 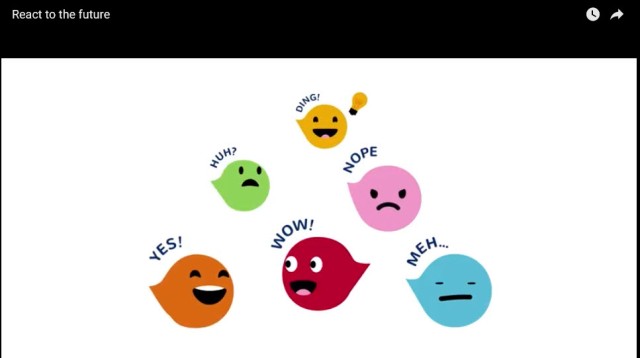 The video explains how to use six special emoji to react to elements of the strategy. The Read the Stories link leads to a page with nine tiles relating to key elements of the plan. These in turn link to a one-page non-downloadable summary with an invitation to “React now” using the emojis.

The next section is a “New vision for NSW” with a video link to a high-level summary. A Learn More link leads to a “New vision for New South Wales” page which describes the FTS as a “suite of plans” whose interrelationship is displayed in a pyramid diagram. The links on this page lead not to the actual plans but instead to a page for each plan with the title in large print, a one-sentence summary, a repeat of the pyramid diagram and a section on how to give feedback. A cryptic “Next Section” at the bottom leads to a lengthy single webpage summary of the relevant document. On each of these pages a PDF logo is the only obvious link to a downloadable version. 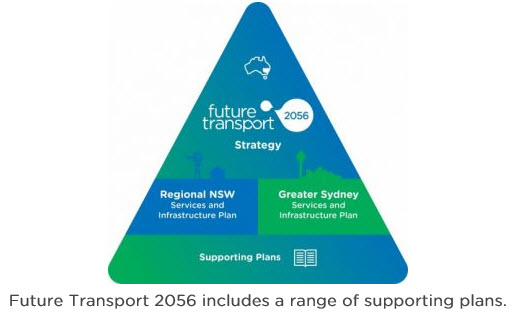 The next section provides an overview of “Your local projects” while the following section outlines “six outcomes for our state” such as “Customer focused”, “Successful places” and “Growing the economy”. Clicking on each of these provides a brief summary and a Find out more link, which in turn leads to a lengthy single web page outline.

Towards the bottom of the home page is an overlapping and sideways-scrolling set of tiles listing each of the substantive plans with a prominent countdown box stating the number of days left to the submission deadline (but not stating the actual due date, 3 December 2017). Confusingly the “Read more” links on these tiles lead not to the actual plans but to the same pages with large print titles mentioned earlier.

The site provides three ways to comment – using the emojis or comment box at the bottom of most pages, highlighting any sentence and then adding your feedback or via the submissions portal. This leads to a curiously-titled Industry Submission Portal which invites submitters to provide a brief summary of their response and attach a more detailed version.

I’ve only just started reading the strategies in detail so it’s too early for me to assess the extent to which their content is integrated, but the radically different approaches to the design of their websites and in the process of making submissions, not to mention the different deadlines for responses for each strategy, do not bode well. It seems strange that despite the claims that “Never before has planning and transport come together to actually map out a 40-year vision to make sure we grow properly in the future,” by NSW Transport Minister Andrew Constance there is so little consistency between the two plans in terms of their basic structure.

The GSRP website is easy to follow, though it does have the advantage that it is dealing with one major planning document (the five district plans each have their own clearly-delineated websites). It requires only modest scrolling, while the whole site has only about 15 pages (counting the main page for each district plan, but not the sub-pages). The PDF versions of the GSRP are prominently labelled and easy to find. The only confusing aspect are the different ways in which to respond.

Given the number of plans involved, the FTS is unavoidably more complex but its website seems to make matters worse. It starts by asking for comment but doesn’t provide anything obvious to comment on. Links which should lead to detailed versions of the plans often do not and the relationship between the different sections is confusing. The home page requires excessive scrolling and there are around 30 sub-pages. While the attempt to use emojis as a form of on-the-spot response may be well-intentioned it runs the risk of trivialising the consultation process.

To make it easier to navigate both websites I’ve prepared the following summary diagram (for the live interactive version click on the diagram or go to http://goodingdavies.com.au/index.php/sydney-region-plan-and-future-transport-strategy/ ). In my next post I’ll look at some specific aspects of the Future Transport Strategy 2056. 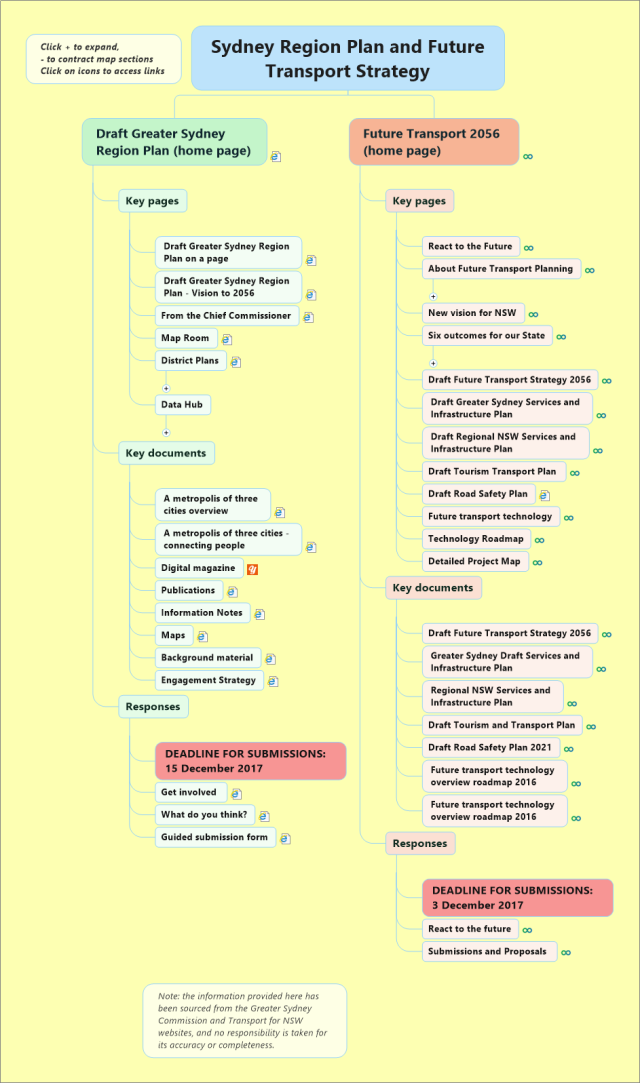 1 Response to Back to the Future? – Sydney Region Plan and Transport Strategy (part 1)