The Sydney Metro City and Southwest stations – why these locations?

The Sydney Metro has made the front pages again because of the news that 52 properties including 19 buildings in the CBD will have to be demolished to make way for the construction of stations to support stage two of the project, City and Southwest (see my last post for a summary of the project). These include some fairly recent buildings over 20 storeys, with the acquisition costs likely to run into hundreds of millions of dollars. This is an inevitable consequence of retrofitting a metro system in any large city but it is relevant to look at the station locations, why they were chosen and the implications for the Metro’s potential to increase the coverage and reach of the rail network as well as its capacity.

That the metro will significantly boost capacity is indisputable and it is also clear that it will greatly extend coverage in North Western Sydney where there is no other rail infrastructure. As I noted in a previous post however, the metro’s role in extending the reach of the heavy rail network in other sectors is a bit mixed. This is because the project involves taking over two existing heavy rail lines (Epping to Chatswood and Sydenham to Bankstown) and converting them to be integrated with the metro; this will increase train frequencies but as there will be no change in the number or location of the existing stations on these lines there will be no change in coverage.

Between these two sections will be the heart of stage two of the metro project – the 15km section that will run entirely underground from Chatswood to Sydenham via the CBD. As this will be close to existing rail lines there is inevitably going to be some overlap in the walk-up station catchments between the new and existing systems, including of course those stations which will act as interchanges where the catchments will be identical.

I’ve attempted to document the walk-up catchments of both the existing and proposed stations as detailed in the Sydney Metro Project Update. To show the catchments I have added colour-coded circles with 500m radii to each station location on a series of maps. There are several important things to bear in mind: 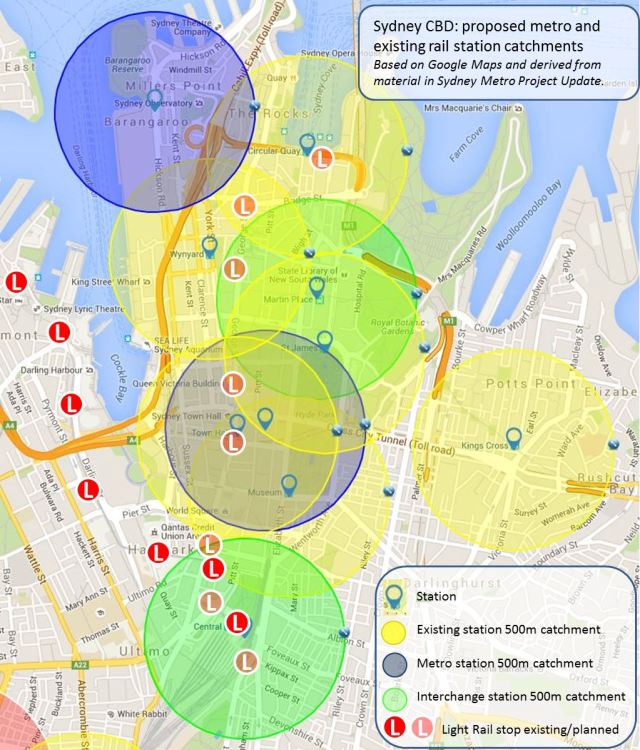 Given that there are already seven stations within the relatively small confines of the CBD there is significant overlapping of the current catchments and it is hardly surprising that the impact of the metro will be largely in terms of improving capacity rather than extending coverage. In addition two of the stations (Martin Place and Central) are interchanges and a third (Pitt Street) is only 150 m from Town Hall station and only slightly further away from Museum and St James stations.

This means that the Pitt St station catchment will be wholly within the combined catchment of these existing stations and in fact is almost identical to that of Town Hall station. Constructing a metro station in this location is logical in terms of the demand in the surrounding area and the consequent pressure on the existing station, which is the second-busiest in the network.  The decision not to connect the Pitt St metro station directly to Town Hall as an interchange to avoid further overcrowding is also understandable, though the resulting pedestrian pressure on the surface street network by having these two stations and a planned light rail stop within a 150 metre radius will need to be carefully managed.

The choice of Central as the primary CBD interchange between the metro line, the existing rail network and both light rail lines needs little explanation though the selection of Martin Place as the central CBD interchange is more interesting. Having ruled out Town Hall as an interchange and seeking to swing the line across the CBD to provide a northwest-southeast link, there was presumably a choice between St James station which has disused tunnels and platforms which could have been upgraded to provide cross-platform interchanges, and construction of a new station linked to Martin Place. Apart from any technical issues involved the latter was selected, presumably because it provided a more central location and has more contemporary station infrastructure. It will also provide a direct interchange for people travelling between northern and eastern Sydney.

Barangaroo will be the only new station that adds substantially to the heavy rail catchment in the CBD. This is the largest area in the CBD which is relatively isolated from the existing heavy rail network and it will not be serviced directly by the new light rail line. While Wynyard Walk will bring the southern part of the area closer to the existing station at Wynyard, the new metro station will support the northern and central part of the Barangaroo development, the new Barangaroo reserve and the growing cultural precinct in Hickson Road.

The addition of Barangaroo will complete heavy rail coverage of the main part of the CBD but there will still be some gaps around its edges.  The western side of the CBD is serviced by the existing light rail line and the CBD and South East Light Rail line under construction will provide a stop in Surry Hills to the southeast. On the eastern side however, while the station at Kings Cross covers much of Potts Point and parts of Darlinghurst, the southern section of Darlinghurst along Oxford Street and parts of Woolloomooloo are comparatively isolated from the rail network.

The following map shows the relationship between the catchments of the existing stations and those planned for the metro line between Chatswood and North Sydney. As I noted in my previous post Chatswood is the only interchange between the two systems on the lower North Shore and there are only two other stops before the metro line crosses the Harbour. This factor and the deletion of the proposed station in the Artarmon industrial area means that all the new station catchments in this sector overlap those of the existing stations in or near the major established centres and will further consolidate development in these areas.

The second map shows Crows Nest and Victoria Cross station catchments in more detail. While the overlap isn’t as marked as it is with the CBD stations there is still around a 50% overlap in each case. The new Crows Nest station will extend heavy rail coverage to the southeast of the existing St Leonards station and Victoria station will extend the heavy rail catchment northwards in North Sydney, relieving pressure on the existing station. There will still be a gap however in heavy rail coverage along Pacific Highway between these two stations where the existing rail line deviates from the highway. 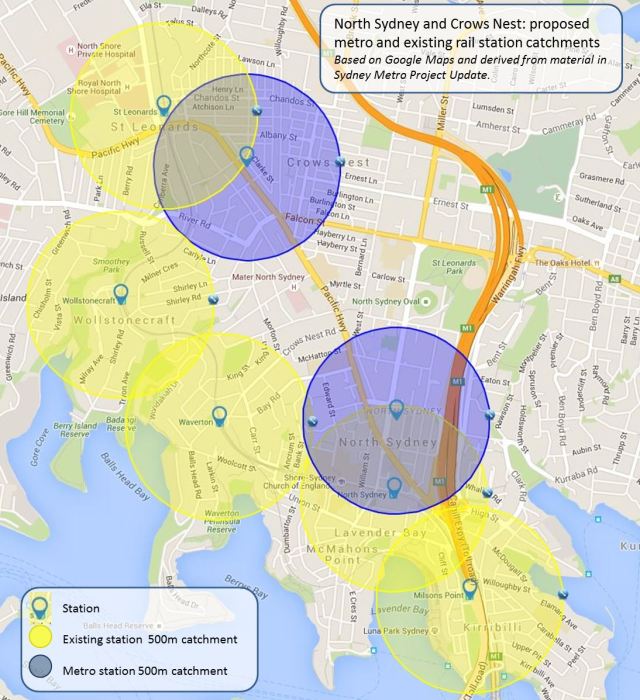 There will be only one new metro station between the planned interchanges at Central and Sydenham at either the University of Sydney or Waterloo, as the final map shows. While this reflects the fact that there are five existing stations on two lines in the area between them, this means there are still gaps which the metro won’t address, most notably the area around northern Marrickville and Enmore.

I’ve also attempted to show the catchments for the two station options still under consideration. The university has nominated a specific site at Maze Crescent, but while a site in the vicinity of the Botany Road Raglan Street intersection has been mentioned a specific site for Waterloo was not proposed in the metro Project Update. The catchments for both proposed locations overlap that of the existing Redfern Station; the university site is further away and would service over half the university within 500 metres and most of the remainder of the campus and Prince Alfred Hospital within 800 metres, as well as a range of other institutions. Meanwhile the Waterloo site would provide access to the Australian Technology Park but would play a more significant role in supporting residential development in this area.

To an extent the necessity of placing the metro broadly within the existing rail corridor between Chatswood, the CBD and Sydenham to address capacity issues means that the new stations in this section of the project inevitably are going to overlap the catchments of existing railway stations. There are however several locations where additional stations could have filled some of the remaining gaps, but the role of the metro in providing high-speed access for outer suburban areas as well as in consolidating commercial and residential growth in established centres appears to have precluded the possibility of additional stations.

2 Responses to The Sydney Metro City and Southwest stations – why these locations?