Getting around Sydney: why orbital public transport matters – part 2

As I indicated in my last article, dedicated orbital public transport corridors are critical to link residential areas and employment centres outside Sydney’s CBD. Some of these corridors are in place and others will be developed over the next ten years, but much more will need to be done to fill the current gaps in the orbital network and to support Sydney’s growth as it moves further west.

In this post I will outline some of the priority areas and look at some suggested options to fill these gaps. To reiterate the definition I outlined in that post, I’m regarding dedicated orbital public transport corridors – including bus rapid transit (BRT), light rail, heavy rail and metro corridors – as those that do not enter the CBD but which join two or more radial corridors and also connect any major centres between these corridors. This definition also includes radial corridors which later turn to take a more orbital path and in doing so cross other radial corridors.

What gaps will remain in the public transport orbital network after 2025? 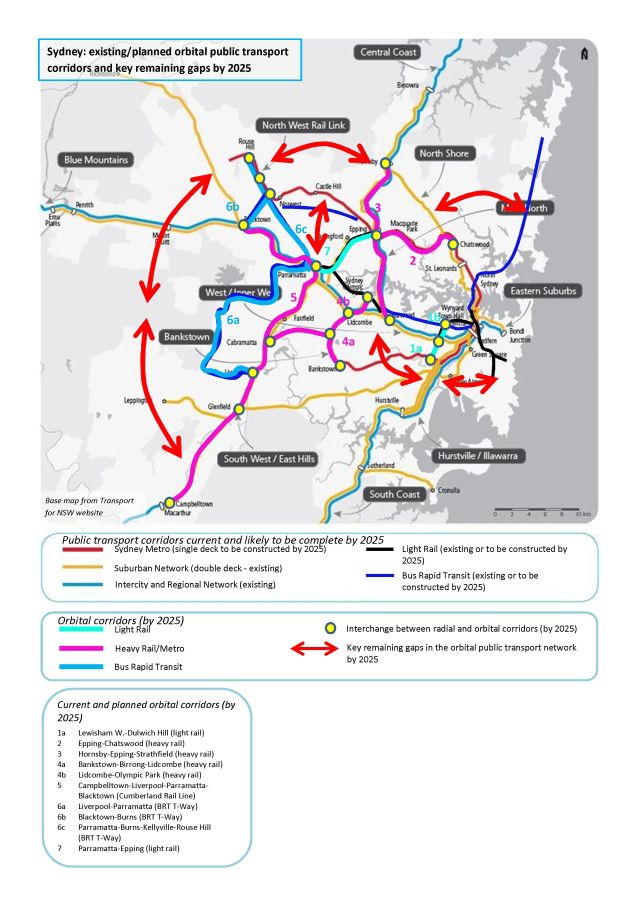 The map above shows some the more obvious gaps which will still be in place after 2025 when a number of major public transport projects including the Sydney Metro, northern beaches and Parramatta Road BRT corridors, the CBD and South East Light Rail (CSELR) and at least part of the Western Sydney light rail network are expected to be complete. My last post identifies these lines and how they will contribute to the creation of orbital public transport links (and as in that post the base map I’ve used here is a slightly out-of-date map from the Transport for NSW website and my additions are indicative only and not to scale).

Broadly speaking, the gaps can be divided into two groups – those closer to the CBD between more established areas with at least some existing radial corridor infrastructure and those towards the periphery where new development is now occurring and there are fewer radial corridors. Examples of the former include the lack of links between the radial rail corridors in the city’s south west and between this area, the airport line and the planned CSELR in the city’s south east. A little further out there are the gaps between the North Shore rail line and the planned northern beaches BRT and between Parramatta to the North West Metro under construction, at Castle Hill.

The gaps at the periphery are of course much larger. Starting at the top of the map they follow an arc between the North Shore Line in the north, the growth centres and the rail corridors in the north west and west, through the site of the Badgerys Creek Airport, and the south west growth centres (and the proposed extension of the South West Rail Link) to the main south rail line, Campbelltown and the proposed Greater Macarthur development in the south.

Map of public transport orbital corridors suggested for development after 2025 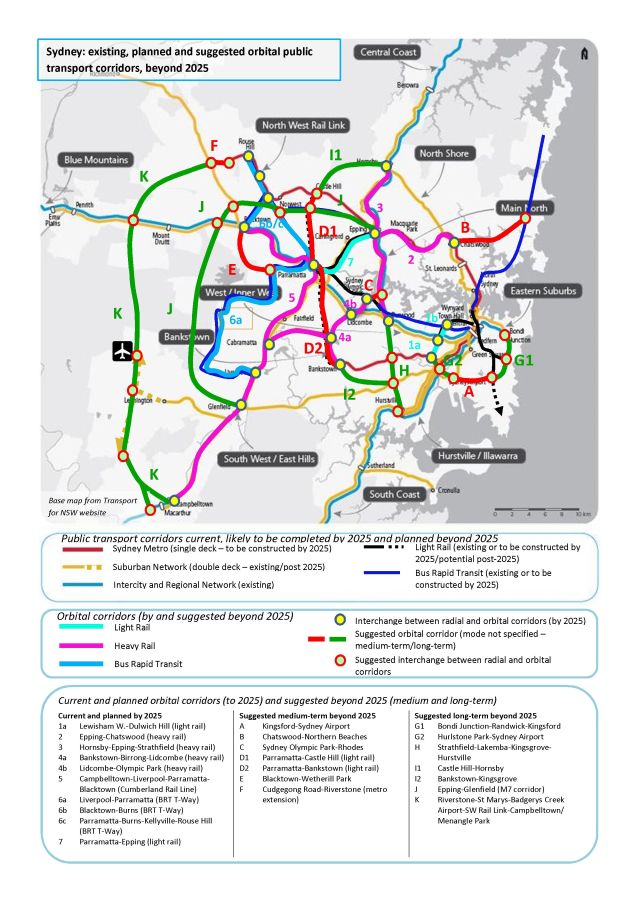 Irrespective of where they are or the potential timeframe for their construction, it is important to start planning these orbital routes as soon as possible so that potential corridors can be reserved and protected from development. To that end the map above contains an arbitrary mixture of government plans, some guesses and my suggestions for orbital corridors that could be developed beyond 2025. The post-2025 proposals have been given letters to distinguish them from the pre 2025 projects, which have numbers.

These routes are not mode-specific as reserving corridors for them is the far more important at this stage, though I do discuss some of the options below. Instead the post-2025 proposals are divided into more incremental projects which could be implemented in the medium-term (shown in red) and longer-term ones which are likely to require more substantial investment (shown in green).

Starting from the CBD and working outwards, my first suggestion in effect would be the next step in the development of an inner west to south east orbital corridor which already has a modest first stage in the form of the section of the Inner West light rail link that runs between the western and Bankstown rail lines. The suggested medium-term route (A) would link the terminus of the CBD and South East light rail currently under construction at Kingsford with Sydney Airport and the East Hills/Airport rail line. This corridor could be either light rail or BRT, with the potential to develop into light rail if and when the rest of the corridor is completed.

Route B would link the North Shore rail line to the planned northern beaches BRT. The State Government is already investigating such a route to run as a complementary BRT between Chatswood and Manly via the Northern Beaches Hospital currently under construction. Route C is a link I’m suggesting between the proposed Parramatta to Strathfield light rail corridor at Sydney Olympic Park and Rhodes on the main north railway line. Rhodes was the original destination for this corridor and the relatively short link (which could be either light rail or BRT) would improve connectivity in this area.

Routes D1 and D2 would effectively come into being with the completion of the final two proposed Western Sydney light rail lines, from Parramatta to Castle Hill and Parramatta to Bankstown (see my previous post for a discussion of the first two lines). In addition to supporting Parramatta’s continued development as Sydney’s CBD and cementing its role as a major transport hub, this corridor would provide a key north-south link between these centres as well as between the both “arms” of the metro and the western rail line.

If constructed route E is likely to be a BRT corridor, providing a link between Blacktown and the western rail line and the Wetherill Park industrial area on the Parramatta to Epping T-Way. Finally Route F is another and possibly more important “missing link”, between the current metro terminus at Cudgegong Road and the Richmond rail line at Riverstone. This link would make most sense as an extension of the metro currently under construction.

Again starting from the CBD the first proposed longer-term corridors G1 and G2 would connect to the route A discussed above to complete an “inner orbital” between the Eastern Suburbs Railway (ESR), the light rail (both the CSELR and Inner West lines) and, in between, the airport and heavy rail lines. As well as providing opportunities for orbital travel this combination of links could also have a potential role in managing demand on the CSELR by providing access to different routes into the city, especially via the ESR. The extension of this could form the eastern part of this corridor, with the rest of the link being serviced by BRT, light rail or a mixture of both.

The next link (H), a heavy rail or metro corridor between Hurstville and Strathfield, was first proposed in the 1990s by the then state government as part of the Action for Transport 2010 strategy. It would link four rail lines (western, Bankstown metro, East Hills and Illawarra) and could be a key piece of transport infrastructure but unfortunately would be very expensive because of the tunnelling involved.

The next two corridors, I1 – Castle Hill (on the north west metro line) to Hornsby (on the northern and North Shire lines) and I2 – Bankstown on the south west metro line to Kingsgrove on the East Hills line would complete the middle ring orbital corridor established by the D1 and D2 light rail links discussed earlier. If they were ever constructed however both these links are much more likely to be BRT than light rail, at least in the short term.

The next corridor out (J) is based on an extension of the existing M2 BRT corridor from near Epping along the M7 motorway. This corridor would cross the western and Richmond railways line and potentially link with the main north and main south lines at either end (though it has to be noted that the direct connection between the M2 busway and Epping station was removed as part of the recent widening of the motorway). The case for such a corridor was included by Western Sydney councils in a WSROC briefing paper prior to the 2015 state election; in fact one of the reasons the M7 has such a wide reservation is to provide capacity for a future public transport corridor.

It is however more likely that the government will proceed with an orbital link further out, based on extensions north and south from the recently-opened South West Rail Link. Parts of this corridor have already been identified by the State government and are being investigated by as part of the Outer Sydney Orbital Corridor Preservation Study. The study is assessing options for a corridor that would include a motorway, rail freight line and “where practical” a passenger rail line. If as I propose the whole link (K on the map) was completed then it would run from the Cudgegong terminus of the metro and/or the Richmond line, across the western rail line, incorporate the proposed extensions of the South West Rail Link before connecting to Campbelltown and Menangle Park on the main south rail line (see my earlier post on the Greater Macarthur development proposal).

Providing services on the orbital corridors

The early identification and preservation of orbital corridors is a crucial first step. As I noted in an earlier post, the failure to identify and resource a corridor for the extension of the South West Rail Link prior to development has impacted on communities at Oran Park and Harrington Park. The next steps are just as critical, however – the development of these corridors and the provision of services on them.

The provision of appropriate services is particularly important. Regardless of mode the services need to be fast, frequent and where possible synchronised with services on the radial corridors they link to be effective as orbital corridors. Only when this occurs will the residents of Sydney, particularly those in outer areas and especially those in Western Sydney, really be able to get around their city using public transport and without having to go through the centre of town.

3 Responses to Getting around Sydney: why orbital public transport matters – part 2