The Sydney Metro – a better option?

After spending a large part of 2017 writing about transport issues and in particular the Government’s metro strategy, I had hoped to start 2018 on a different note. Retired transport bureaucrat and planner Dr Dick Day’s thoughtful opinion piece on these plans published last week has caused me to change my mind.

Day’s initial comments are similar to the criticisms I made in my last post and earlier articles about the Metro, in particular the inappropriateness of metro technology for a low-density corridor and the hidden and exorbitant costs of converting existing rail lines to metro operation. He also notes the disruption to the existing rail network that these conversions will cause.

Day’s main concern is the point raised by the submission he helped to write to the State Government in 2015 which was obtained by Fairfax late last year: the metro will do little to solve the existing network’s capacity problems between Strathfield and Central, even with the expensive incorporation of the Bankstown line. As Day puts it:

The Bankstown Line metro conversion represents a poorly thought out initiative that will incur considerable expenditure and disruption yet is incapable of being used to its full potential to relieve congestion on the rest of the network.

This is because in Day’s view the Bankstown line will never be able to use the considerable additional capacity provided by the Metro (unlike the original heavy rail plans which would have directed this additional capacity to relieving pressure on the congested Main South and East Hills lines). Day estimates that converting the Bankstown Line to metro operation is unlikely to provide more than about 15,000 passengers per hour even after major residential redevelopment.

Day has offered an interesting alternative. Assuming the Metro is extended through the CBD as currently planned, he has proposed that the Bankstown line conversion to metro be abandoned. Instead he suggests the Metro West line to Parramatta (currently planned as a second metro line after the entire North West to Bankstown line is built) be “reprioritised” and connected directly to the CBD Metro line. 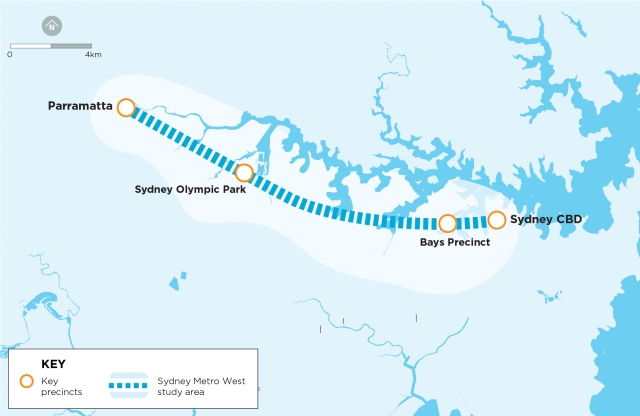 Day’s point is that this would provide relief more directly and cheaply to the heavily congested Strathfield-Central corridor than the Bankstown line conversion, while avoiding the lengthy closure of the latter. In effect this would slow the growing demand for train services on the existing rail line.

While Day does not provide details it can be assumed that the line from Chatswood through the CBD to Central would remain unchanged but the section to Sydenham would be abandoned. Instead the line would leave Central and then head west, following any of the options currently proposed for the Metro West line. The one change that could warrant serious consideration given the line’s more westerly direction is the relocation of the first station after Central from Waterloo to Sydney University.

One difficulty with Day’s proposal is that it would not directly provide extra capacity by diverting actual trains from the current network to even the limited extent of the current Bankstown line proposal. Day implicitly concedes this, noting that “maximum utilisation” would be achieved by converting the slow tracks from Parramatta to Blacktown to metro operation which would in part achieve this end. He goes further and suggests that the whole Richmond line could be converted as well, though Day notes these conversions create “costs and inflexibilities that would have been avoided without the unseemly rush to a completely divergent metro technology”.

It is unclear however whether even if both these lines were included they would divert the same number of trains and passengers to free capacity that even the Bankstown line conversion would achieve. I suspect that all stops trains further out on the western line to St Marys would have to be converted to achieve this. It is unclear though how this would fit with the options under consideration to use the Metro West line to connect to the proposed Sydney West Airport.

There is however one underlying advantage to Day’s proposal that he doesn’t mention. While it would be likely to be controversial, extending the metro line to Richmond would bring it very close to the Metro North West terminal and stabling yards at Cudgegong Road. Joining the two would not only provide an important orbital link and increase connectivity from Windsor and Richmond to the North West employment centres but also provide some operational benefits.

Day claims modestly that his plan could be sold as a “reprioritisation… [that] would avoid a lengthy closure of the Bankstown line and reinforce the status of Parramatta as Sydney’s other CBD,” but his suggestion has great merit and should be considered. While the extension options can be debated, the main benefit of Day’s core proposal is that it would provide benefits sooner and more directly in Sydney’s most congested corridor while avoiding the expensive and unnecessary conversion of the Bankstown line.

2 Responses to The Sydney Metro – a better option?