Taking the train downtown part 2 – will we be sitting or standing, and why?

In my previous post I examined the investments into heavy rail capacity and connectivity into and through the CBDs of Auckland, Brisbane, Melbourne and Sydney planned over the next ten years. One aspect which I didn’t have time to examine more closely was the range of approaches to rail car design and procurement across these projects.

As it appears that Auckland won’t be acquiring additional rolling stock for its new City Rail Link, I’ll concentrate on the purchases being made for the new lines in Brisbane, Melbourne and Sydney (and in the case of the latter only the purchases for the new metro and not the intercity fleet). The comparison is now a little easier to make as the Victorian Government has recently announced more information about its order for 65 new trains and identified the preferred tenderer. It is also a more interesting comparison because it highlights the different approaches to procurement and specification across the three cities’ new rail fleets.

The following table (click here for PDF version) summarises each system’s current or planned rolling stock purchases, though one frustrating aspect of this exercise is that none of the governments has published complete information about their new train fleets and/or how they will be deployed. Brisbane’s system for example has provided reasonably detailed data about its 75 new trains but very little on how and where they will be deployed, though it can be safely assumed that they will be in service on some of the longer runs and will almost certainly use the planned Cross River Rail link.

Melbourne is almost the reverse; we know that the trains will be used on the Metro Rail link and the connecting Sunbury and Cranbourne/Pakenham lines, but despite the announcement mentioned earlier we know little about the carriages themselves. Sixty-five new trains are on order but the government has released limited information about their design except to say that they will be seven-car “High Capacity Metro Trains” (HCMT) with 20% more capacity than trains in the current fleet. A third-party source suggests that the trains will have 552 seats and a crush capacity of between 1,100 and 1,380 but these claims cannot be independently verified.

In the case of the Sydney metro we know how the 22 new trains will be used as well as their estimated passenger capacity. No information has been provided however regarding their actual dimensions or how many extra trains will be acquired for stage 2, which will complete the metro line through the CBD and towards the southwest.

In assembling the following data some assumptions regarding the missing material have had to be made. For example, the longest trip scenarios in the case of Brisbane and Melbourne are based on current travel times which may alter once the new services commence; in relation to the Sydney Metro they are based purely on the assumptions contained in the plans and separate announcements regarding each stage of the project. These trip lengths and durations are provided only to give broad indications of the sorts of trips that passengers on the new trains will face.

One of the clearest differences is in procurement policies. I may follow this up in more detail in a separate article, but there is an increasing trend for most Australian states to purchase new trains and trams virtually off the shelf from overseas manufacturers in China, Korea and India, with little local input. For example, the new trains for Brisbane and Sydney will both be manufactured in India (by Bombardier and Alston respectively) and will have very low levels of local content.

The singular exception to this trend is Victoria, where the government has announced that the new metro fleet will be 60% manufactured in the state. The local partner for the Melbourne trains will be Downer EDI while the overseas partner involved in the project, CRRC, is located in China.

This approach is consistent with the government’s last three train orders, which have averaged over 50% local content. The Victorian government also sees train manufacture as a key industry for the state with the Premier Daniel Andrews noting that “1,100 highly-skilled local jobs” will be created by the metro trains project. Downer’s existing manufacturing facility will also be upgraded, Australia’s only bogie manufacturer will be established and CRRC will establish new regional headquarters in Melbourne.

While the single-deck rolling stock may look superficially similar across the three systems, there are some significant variations. These reflect not only the physical differences between the rail lines which will be served by these trains but also the differences in the philosophical approaches which have been adopted by the governments and rail operators.

In the case of Brisbane, while the specific routes the ‘New Generation Rollingstock” (NGR) will operate have not been announced, the 75 six-car trains (454 cars) being delivered are likely to service the longest distance lines to the CBD (up to nearly 90 kilometres) and have the highest travel times out of the three cities. Consequently they are being configured as longer-distance suburban trains with a relatively high proportion of seated passengers (47%) in a mix of transverse and longitudinal seating. They will have the lowest total maximum number of passengers (964) and reflecting the travel times involved are also the only trains to have toilets. 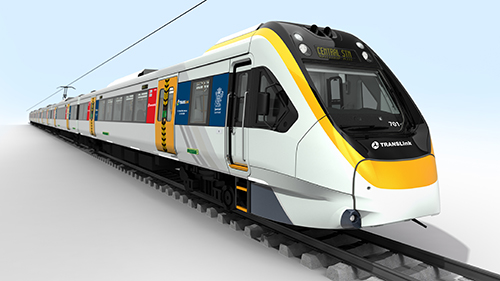 The new trains in Melbourne will travel lesser maximum distances (57 kilometres to the CBD) than those in Brisbane but will have travel times almost as long. They will be configured as medium-distance trains with the highest peak-hour capacity out of the three new fleets; it is claimed they will be able be able to carry 20% more passengers than current Melbourne trains.

While specific capacity estimates are unconfirmed the trains are likely to carry at least 1,100 and possibly up to nearly 1,400 passengers with around 40-50% seated, again in a mix of transverse and longitudinal seats. They will also be the longest trains at seven cars and 160 metres; this means that while 10 fewer trains are being ordered than in Brisbane, the number of cars (455) is almost identical. It is also understood that there is the potential to increase the train lengths to nine cars.

Sydney’s new metro trains will be quite different to the other two fleets. Only 22 six-car trains (132 cars) are currently on order for stage one but this will almost certainly be increased for stage two. The trains are shorter than their 7-car Melbourne and (probably) 6-car Brisbane counterparts but at 1,100 passengers will have a potential peak hour capacity larger than the Brisbane trains and almost as large as Melbourne’s. 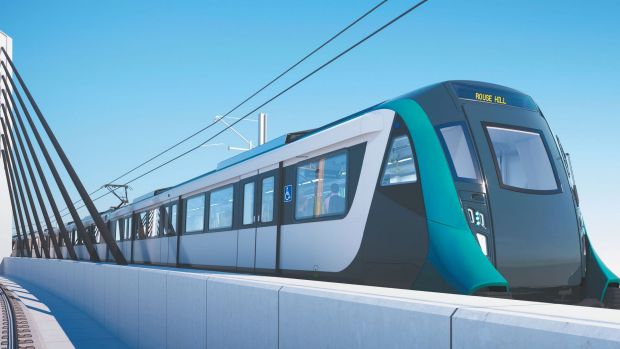 The Sydney metro trains will have the shortest maximum distance and travel time to the CBD (47 kilometres and 51 minutes) of the three systems. Although these are comparatively high by international standards the fleet has been designed as shorter-distance trains with an emphasis on maximising capacity. The trains have fewer seats than their Brisbane and Melbourne counterparts with only 34% of passengers being accommodated in longitudinal-only seating. The new fleet in Sydney also differs from those in Brisbane and Melbourne in two other significant aspects; the trains will be driverless and they will be completely incompatible with the existing double-deck network.

In the case of Melbourne and Sydney specific dedicated routes have been announced. In Melbourne the trains will run from Cranbourne and Pakenham to Sunbury via the Metro Rail Tunnel when it is complete. In Sydney once construction of stage one of the metro is finished the trains will run from Cudgegong Road to Chatswood ; stage two will extend services under the Harbour and the CBD and then take over the Bankstown line as far as Bankstown. As noted earlier in Brisbane it has been announced that the new trains will operate on all lines in the network, though given their configuration it is likely that they will be used more often on the longer corridors.

The estimates regarding peak hour frequencies and capacities shown in the table are speculative and in the case of Brisbane impossible to estimate. It is likely however that at any given frequency of service during peak hour the larger size of Melbourne’s new trains means they will have an edge over Sydney’s in terms of total capacity and in particular the number of seated passengers.