Sydney’s light rail project part 3 – trying to do too much?

In my last couple of posts I talked about some of the changes to Sydney’s CBD and South East Light Rail (CSELR) project contained in the Modifications Report (MR) which was released late last year as well as the implications of one particular change – the adoption of Alstom’s wire-free technology for the George Street pedestrianised section of the line. 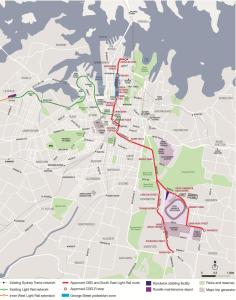 One fairly important change which I haven’t discussed in detail is the revelation that came with the signing of the contract for the project – a blow-out in the cost of half a billion dollars, from $1.6 to $2.1 billion. This is a fairly mind-boggling 31.3% increase, supposedly partly to cover the increases in capacity and other changes outlined in the MR, but which also reflects the extraordinarily high cost of rail infrastructure projects in NSW compared to other states and overseas.

While I have supported the principle of the CSELR project, this increase along with some of the changes proposed in the MR and several of the questions asked by critics of the CSELR has troubled me – and a range of other observers. Obviously the project is now a fait accompli with the contract signing and the support of both the major parties in the run-up to the NSW state election later this month. I think that the south-east needs some sort of rail solution and I also believe the CSELR can still deliver on that, but it is still worth considering some of the issues involved:

Capacity: Calculations based on the revised service frequencies and increased light rail vehicle (LRV) capacity proposed in the MR of up to 466 passengers indicate a peak capacity of just under 7,000 passengers per hour in each direction on opening. This could be expanded to just over 8,600 when 18.5 rather than 15 LRVs are operated per hour.

This sounds like a lot but there has been a passionate debate on the Transport Sydney blog about whether there will be sufficient capacity to cover the many south-eastern bus routes that will be replaced by the light rail. Add to this the additional inner-west bus routes that will terminated at the Rawson Place interchange plus its role as a CBD circulator and it is hard to see how the CSELR will have enough capacity even with the longer trams now planned.

Frequency: The service is planned to open with frequencies of between four and six minutes each way with the intention to ramp this up eventually to between 3.25 and five minutes as demand increases. This means that during the day on opening there will be a 67-metre tram passing any point in the George Street pedestrian zone every two minutes in either direction and every one minute 45 seconds once the additional capacity is required. In addition I suspect that this increased frequency will be required a lot sooner than anticipated.

Travel time: Proposed travel time is between 24 and 39 minutes from Kensington and Randwick to the city. While the light rail will not be nearly as adversely affected by traffic congestion as the current bus services in peak hour and will therefore be more consistent, these times are no faster and in some cases are actually slower than than those of the bus services that will be replaced.

Amenity: Another major issue is the affect on the amenity of properties along the route and in particular the mixed impact on the viability of the planned George Street pedestrian zone. Part of the rationale for the light rail is that it will be a catalyst for and provide synergies with the proposed mall – for example, the light rail will benefit from having its own traffic-free right of way while people using the mall will also benefit from the proximity of accessible and quiet, catenary-free electric transport.

In reality however it is highly unlikely that the pedestrian zone will ever operate in the same way as say the Pitt Street Mall does now. Sure, two lanes of noisy traffic will disappear, but the other two will be taken over by trams running every two minutes or less and the centre of George Street will not be the sort of place that the not particularly tram-literate pedestrians of Sydney would want to dawdle.

Reliability: I discussed this in my last post in relation to the catenary-free section in George Street. As noted there, the Alstom APS system to be used to provide power via a safe third-rail in this section has been used in only a few cities and it is unclear how well it will perform in a Sydney summer downpour when road surfaces can be covered in centimetres of water.

Cost: As I noted, the project cost has grown over 30% to $2.1 billion and it is in this context that a number of the criticisms are relevant. At around $175 million a kilometre this is a very large sum of money for 12 km of track, all of it on the surface. Admittedly this costing probably includes elements such as the conversion of George Street to a pedestrian zone but on the other hand land costs are relatively low as the route mainly uses roads, existing bus corridors and government-owned land. By comparison the 23 km North West Rail Link (NWRL) which involves extensive tunnelling and viaduct construction will cost $8.3 billion, or only slightly over double the cost per kilometre.

In summary, the CSELR is being asked to do a lot – provide high-frequency and high-capacity line haul services to and from the south-east to replace hundreds of buses, provide CBD access for bus passengers via an interchange for hundreds of other services from the inner west and elsewhere, act as a key intra-CBD circulator, provide special events transport, contribute to the amenity of the CBD pedestrian zone – the list goes on.

This isn’t to say that it is inappropriate for any of these tasks or that it will fail at them but it can be argued that light rail is being used to tick an unrealistically wide range of boxes in relation to this project. At least some of these would have been better served by examining and adopting other modes, such as metro or heavy rail either as an alternative or to complement the CSELR. In addition, in attempting to meet all these demands, the cost of the CSELR has grown enormously.

It is however too late now to talk about alternatives – the contract has been signed and construction has started. Rather than wonder what might have been it is more useful now to look at short-term and long-term strategies to address the problems that the CSELR is likely to face, especially in relation to capacity. Here are a few suggestions: 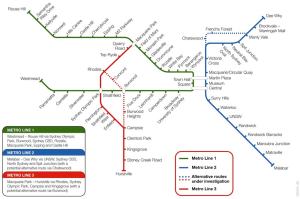 “An extension of the ESR would complement, rather than compete with, a light rail line along Anzac Parade to Central. The heavy rail would provide the rapid journey times and mass transit capacity into the northern CBD that light rail is unlikely to offer.” (Infrastructure NSW State Infrastructure Strategy, 2012: 115) 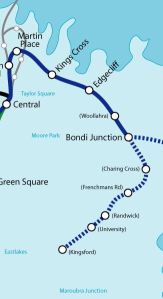 Using the NWRL as a loose guide, the cost of such an extension would be in the ballpark of $2.1 billion, or around the same again as the CSELR. Some cost savings could be made by constructing a single track from Randwick to Maroubra Junction, with provision for the construction of a second tunnel. This extension would also avoid duplicating the CSELR line, but while it is a more attractive proposal than a SE metro its expense means that it would be a very long-term proposition.

Of these options my preference would be for the construction in the medium term of a second line to the west of the CBD connected to the Inner West Light Rail (IWLR) line, combined with a bus interchange. This would have a number of advantages; as well as providing a single-seat ride for IWLR passengers into the CBD it could be used to provide more reliable capacity for inner west bus passengers as an alternative to the vagaries of trying to board crowded trams from the south-east at Rawson Place. It would also provide a public transport link to the doorstep of Barangaroo from the Central end and potentially via the Rocks for CSELR trams.

If however there is still a need for further capacity in the longer term especially to and from the south east, then the best option appears to be construction of the ESR extension. This would not be cheap, but at least the combined cost of this and the CSELR would not exceed that of the metro line which arguably should have been built in the first place.

8 Responses to Sydney’s light rail project part 3 – trying to do too much?